Heat pumps of all sorts (ground source or air source) are going to save the World. The debate over ground or air rages on but is largely irrelevant when a hybrid design could cherry pick the best bits from both. Both suck heat out their surroundings and pump it to a higher level.  You get 3 or 4 times more energy out than is put in, a seemingly impossible engineering miracle which still, for many, defies belief. The in-out energy ratio is the coefficient of performance or COP.

First lets join the debate about ASHP vs GSHP by comparing the COPs of both across the season.

The ASHP operates in a wide temperature range between the red line (day time running) and the blue line (night time running). Cold night time temperatures look pretty disastrous but warmer day time running produces consistently high COPs. On the black line the GSHP does without the wild swings and gently declines in performance as it sucks the heat out of the ever cooling ground.

While the GSHP (black line) gradually loses performance over the winter the ASHP can always do better on warmer days (red line) making the two systems closely matched during the daytime, up until Christmas anyway. Soon after that the daytime COP on the air source starts to improve while the ground source continues to deteriorate.  The only redeeming feature of the ground source is that it is miles better than the air source blue line at night and cold days.

Even though the GSHP rules the night an ASHP system geared towards more daytime running would be a match for the much more expensive GSHP which, let’s face it, doesn’t always need to run at night at all.

However, some new electricity deals for electric car charging (7.5p/kW.hr at night – April 2022) make a GSHP, with more night time running, quite compelling. It might be thermally less efficient but the running cost is only 25% that of daytime rates.

If only there was a system that could cherry pick the best COP line on the chart for any given moment. It would need to extract heat from the air on most days – red line – and extract heat from the ground at night – black line. The air side would not run at night so the blue line can be ignored and the system would cherry pick between the red and black lines. The average COP over the season would be around 4 which is better than either system on its own, so best in the world then. Luckily designing such a system is easy really and not particularly expensive either.

For the core of the system we start with a GSHP unit.  As the name implies we need to feed it with some warmed water from a ground loop or slinky and more on that later.

There is already water going in and out of the GSHP unit so warming it with air is simple. Just connect a parallel circuit incorporating an air handler unit, that is to say, a large heat exchanger with a fan on it. This is only connected to the buffer tank and is completely independent.

A few car radiators (surprisingly cheap) and a fan or two to make the equivalent of an air handler for about £200. 12v fans for cars are waterproof and easily available. A simple solar controller brings in the AS module whenever it can contribute.

A buffer tank is used to handle the cold water coming out of the heat pump. The tank allows the air side to store daytime energy.

Warm air is a great resource so we decouple the air source module and let it run whenever there is a benefit, whether the heat pump is on or not. The tank will nearly always be available to charge when the heat pump is running and supplying an icy return flow on its way to the slinkys.  A solar controller turns on the fans and the circulation pump. Similarly a Dt controller optimally switches the valve which chooses between the flow from the tank to the slinkys or direct flow to the heat pump. The valve needs to be a Coster valve which gives a blended changeover rather than a paused switch otherwise the heat pump might get confused. When the tank is warmed up the flow back into the slinkys is highly beneficial by raising the COP line slightly and delaying that end of season fall off in performance. The straight black line on the COP chart will bend upwards into better COP territory as shown in the new chart.  The new system always selects the best source for the best COP  and  is  always  superior  to  conventional  systems.

Normally the ground starts the winter at around 12C then the GSHP and cold weather gradually take that down to around 0C. Permafrost around slinkys is not unusual. Normal ground loops are designed to perform at the worst end of this so they have to be huge. Not so with ours which can be very much smaller because:-

I’ve done a job where the slinky was trucked down from Switzerland along with a man in a white coat and a bill for thousands; a bit over the top when polyethylene tube from the local builders merchant is just as good and costs under £300.

N.B. The pipes are filled with antifreeze and there are regulations about ground pollution so you can’t be too casual about pipe specification.

Pipes for the air side and the slinkys

It’s important to note that the power eventually delivered by the heat pump has to come from the air side or the slinky or both together. A quick look at my model for power and flow shows that for the air side the pipes will have to be 1″ at least to flow enough to raise 10kW on a Dt of 6 degrees. Same goes for the slinkys where on the same parameters the water would be in one pipe for around 2 minutes so it would almost certainly be better to have 2 slinkys in parallel to make that 4 minutes. A rule of thumb is that 10m of slinky trench makes 1kW so 100m for 10kW. Could we halve that ?  Maybe not quite but there would be no stress in cutting down a lot. Don’t forget that most of the time the air side and the slinky would run together so reaching 10kW would not be a problem.

Just a thought. If all this kit were built into a small shed with sun facing glass sides it would be easy to fit the fans into the back wall and the heat pump onto a shelf for easy access. The solar input would raise the COP slightly and a few black water containers would store heat to ward off radiator frosting. To go even further, the air side could be boosted by big ground heated tubes which typically are good for a lift of 5 degrees. There would be wooden slatted duck boards on the floor to let the air up. So, with all this, not just best in the world but best of the best in the world.

In the summer the cold tank can be left to get really cold and a coil can send the cold to the main heating system and onwards to the fan coil units.  Aircon sorted for almost no cost!

BTW – the heat pump  module will be making heat when the aircon is running so you can heat the pool! Think of the pool heat exchanger as just another radiator on the domestic circuit, it couldn’t be simpler or cheaper.

If you are looking at heat pumps then I’ll assume you will have seen this heating system which particularly favours daytime running of Air Source Heat Pumps, a feature in keeping with the free power from PV panels.

In the light of my comments in Heating News this system has been revised and simplified. Revision 2 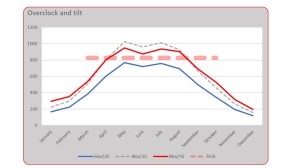 Using big PV to go off-grid – or nearly off-grid – makes sense especially when driving a heat pump. You’ll need every trick to make a limited energy supply go further so make sure you check out the 6kW overclock and tilt concept.