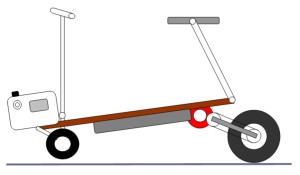 Many versions of minimalist personal transport exist or have been proposed ranging from motorised skateboards to some excellent rubber tracked machines. To home in the best solution lets pose a question. Say you are a soldier about to leap out of a Hercules to a DZ 10km from your final destination. What would you like to strap on your back to make the mission go well, apart from lots of guns and ammo, hot coffee and a pocket full of Werther’s Originals? Most of the world is populated so there are likely to be some rudimentary roads and a few fields to cross so a folding electric bicycle would be a good start but could we get any better, smaller and lighter? Well there’s a problem; as a vehicle reduces in size from something one sits in to something one stands on the forces of acceleration or braking are trying to spin the rider about his centre of gravity and these can only be mitigated by lowering the C of G or lengthening the wheel base – think dragster – so that the forces are countered by trying to lift the load. This is pushing us towards something akin to a skateboard. Ah! Now there’s a twisty idea. A skateboard with a powered single enlarged rear wheel like the tail of a miniature motorbike. To counteract the back flip that acceleration would cause, the rear wheel pushes down to tip the rider upwards and forwards; a handy feature too when a small jump is required. Motorbike rear ends tend to squat under acceleration so the drive would incorporate an intermediate gear to reverse the torque and additional push would come from the dynamic electric shock absorber. Now a sharp twist of the throttle will result in an upward push from behind as well as a surge forwards.
The front end has 2 rugged 8” wheels that tilt and steer like the latest 3-wheel scooters but with a telescopic steering column that is good for the standing position or sitting when the seat is used.
The 15km range is every bit as good as an electric skate board and this can be extended a few times by a tiny 30cc petrol generator, about the size of the smallest chain saw, that can be clipped on just behind the front wheels.
So there you have it. A long distance 3-wheeler that you can wear like a rucksack, sit on, that can jump logs and ditches and needs minimal skill to ride. Now where’s my parachute?

Tyres: The springy rear end allows for solid rubber tyres all round. The ideal profile would be like an inverted ‘T’ with a raised rim around the circumference to give a smooth and economical ride and the side pieces with robust tread that only comes into play when the tyre sinks in mud or snow.

This site uses Akismet to reduce spam. Learn how your comment data is processed.